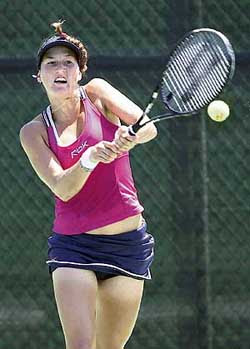 Worried they couldn't expect much interest in the two women's quarterfinals coming Wednesday -- 2004 champion Svetlana Kuznetsova against 18-year-old Agnes Szavay of Hungary, and No. 6 Anna Chakvetadze against No. 18 Shahar Peer -- U.S. Open officials changed things up. With both players' approval, they shifted the quarterfinal between six-time major champion Venus Williams and No. 3 Jelena Jankovic from Tuesday to Wednesday night!

I personally would rather watch Shahar on her worst day than Williams on her best.
Posted by Unknown on 2:32:00 PM