The Future of Israel 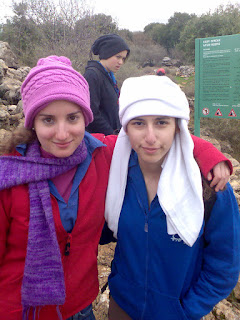 These are the young people who live in Eretz Israel.
Those who bless the children of Israel will be blessed.
Posted by Unknown on 4:11:00 PM No comments: 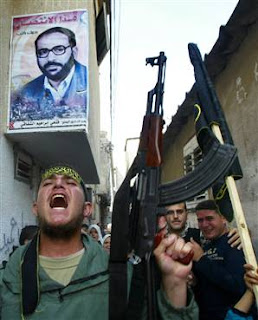 United Nations Secretary-General Ban Ki-moon told a Paris gathering of nations committed to financially supporting the Palestinian cause on Monday that without an increase in international humanitarian aid, the impoverished Hamas-controlled Gaza Strip is headed for a crash.
Ban suggested that a further worsening of conditions in Gaza would result in even more Palestinian terrorism. As in previous statements by other international figures, the UN chief appeared to be blaming Israel's blockade of the coastal territory for security reasons for the dire situation.
But during her flight to join other world leaders at the donors conference in the French capital, US Secretary of State Condoleezza Rice told reporters traveling with her that Hamas alone is to blame for Gaza's appalling circumstances.
Hamas' anti-Israel policies and support for and practice of terrorism are the direct cause of the situation in Gaza, said Rice.

Israeli child wounded by Gaza rocket fire
A three-year-old Israeli child was lightly wounded on Sunday afternoon when a rocket fired by Palestinian terrorists operating out of the nearby Gaza Strip slammed into the side of his home in a southern Israel kibbutz.
The child's mother, who was sitting just several feet from her son at the time of the attacks, was treated for shock.
Another rocket hit a nearby community several hours later.
Residents of the area used the incident to again demand the government of Prime Minister Ehud Olmert authorize the kind of broad ground invasion of Gaza that military experts say is the only way to curb the terrorist rocket fire.
A report released by the Israeli army on Sunday revealed that with recent improvements in Palestinian rocket technology, some 190,000 Israeli civilians now live under direct threat of artillery attacks from Gaza.
In other Gaza news, Israel's left-leaning Ha'aretz newspaper reported that the United States is weighing several options to help Egypt prevent the smuggling of weapons into Gaza via the Sinai Peninsula. Among the options being considered are the equipping of Egyptian border patrols with sophisticated tunnel detecting equipment and the digging of a deep canal along the border.
Washington began looking into the matter following years of complaints by Israel that Egypt was doing little to stop the flow of arms into Gaza, even after Hamas seized control of the coastal territory last June.
Israeli officials have pointed out that their forces exercised much greater control over the short Gaza-Sinai border prior to the 2005 Israeli withdrawal from Gaza, and insist Egypt could easily do the same if it desired.
Posted by Unknown on 1:13:00 PM No comments:

The Israeli army launched a larger-than-usual incursion into southern Gaza on Tuesday as part of an ongoing effort to curb Palestinian rocket and mortar fire.
Army officials acknowledged the the inclusion of 10 tanks and armored bulldozers in the raid made it appear to be an escalation of Israel's war on Gaza's terrorist infrastructure, but stressed that the operation was a routine action and not the start of the full-scale land invasion of Gaza Defense Minister Ehud Barak threatened to launch if Gaza-based terrorists did not stop attacking southern Israel.
During the operation, six armed Palestinian terrorists were killed by tank fire and airborne missiles, and another 60 terror suspects were apprehended. Four Israeli soldiers were lightly wounded when a Palestinian anti-tank missile slammed into one of the Israeli vehicles.
In related news, the government of Prime Minister Ehud Olmert on Monday rejected a Supreme Court petition filed by residents of the southern Israel town of Sderot demanding that the government fortify their homes against ongoing Palestinian rocket attacks.
The residents insisted the government is obligated to do everything in its power to defend its citizens, and noted that when Israel pulled its military forces out of Gaza in 2005, Mr. Olmert, who was the primary driving force behind the disengagement, adamantly declared that the first Palestinian rocket to be fired from a Jew-free Gaza would result in a crushing Israeli response. Thousands of rockets later, the government has yet to launch the promised retaliation.

Thanks to Israel Today
Posted by Unknown on 11:14:00 AM No comments:


LAST week’s multi-national summit meeting here was about many things, the least of which, perhaps, was the pursuit of Israeli-Palestinian peace. Behind the calls for the creation of a Palestinian state that would live serenely and stably alongside the Jewish state, beyond the vision of a Middle East at last absolved of its longest-running conflict, was the paramount question of power — who in the region wields it and who in the region wants it. Indeed, while Annapolis is unlikely to succeed in bridging the gaps between Israeli and Arab positions, it effectively drew lines in the sand between those nations siding with America and the West and those allied with Iran.
As a rule, international conferences have never served as effective frameworks in the search for Middle Eastern peace. The British held the first one, the St. James Conference, back in 1939, and failed to reconcile the warring Jews and Arabs of Palestine. The United Nations tried next at Lausanne in 1949 and met with similar results; Arab delegates refused to sit at the same table with the Israelis. The Geneva Conference, jointly sponsored by the United States and the Soviet Union but without the participation of the Syrians and the Palestinian Liberation Organization, convened in December 1973, and unraveled a few days later without a single sentence exchanged between Arab representatives and Israelis.
Far more pomp and optimism attended the Madrid Conference in 1991 where President George H. W. Bush, flush from his victory over Iraq, heralded a new era of Arab-Israeli understanding. Such empathy was notably absent, however, as Israeli and Arab leaders exploited the forum for trading accusations. Stymied, the comprehensive talks dissolved into separate Syrian-Israeli and Palestinian-Israeli tracks that led ultimately nowhere.
The Annapolis gathering, at least superficially, seemed different. Avoiding the rancorous rhetoric that poisoned previous gatherings, Prime Minister Ehud Olmert of Israel and Mahmoud Abbas, the Palestinian leader, ardently reiterated their commitment to achieving peace, even at great sacrifice. Present at the table were not only the Syrians and the Palestinians but also the Saudis — talking to, if not yet shaking hands with, their Israeli counterparts.
Nevertheless, the chances for any progress emerging from Annapolis seem at best remote. Peace treaties in the past were forged by strong statesmen — Menachem Begin of Israel and Anwar Sadat of Egypt, Israel’s Yitzhak Rabin and Jordan’s King Hussein.
But Mr. Olmert and Mr. Abbas are two of the region’s weakest leaders, unpopular among their own people and discredited by corruption charges. And President Bush, who, unlike his father, has not won a war in Iraq, is hardly perceived as muscular in Middle Eastern eyes. Indeed, Mr. Bush’s refusal to engage in direct mediation in the manner of Bill Clinton and Jimmy Carter, and his insistence that comprehensive talks be broken down into bilateral and multilateral tracks, à la Madrid, further diminishes any hope for breakthrough.
Yet, in spite of its glaring handicaps, Annapolis must be deemed a triumph — not of peacemaking, paradoxically, but of girding the region for conflict. Though no doubt sincere in their desire to neutralize the Arab-Israeli irritant in Middle Eastern affairs, participants in the conference were above all motivated by their fear of a radical and relentlessly aggressive Iran. This fear has deepened with the success of the Iranian proxies Hezbollah and Hamas in Lebanon and Gaza, as well as the expansion of Iranian influence westward into the Iraqi vacuum.
The inability of the international community either to entice or deter the Iranians from producing nuclear weapons adds urgency to the need to unite those countries threatened by those bombs. That, and not American fiat, brought 49 states and organizations to Annapolis; that, and not the yearning for an Israeli-Arab accord, impelled a Saudi prince to sit alongside an Israeli prime minister.
Not unexpectedly, the Iranians reacted ferociously to Annapolis. President Mahmoud Ahmadinejad pronounced it a “failure” and the government-controlled press promised to “bring down Islamic wrath” on its participants. But such rage merely betrays the anxiety induced by Annapolis in Tehran. For the first time a coalition of Western and modern Arab leaders has coalesced and declared its commitment to resist “extremism” in the Middle East — a well-known euphemism for Iran.
What’s more, new efforts have begun to confront Iran outside of the United Nations and woo Syria from Iran’s orbit. An international conference may not be the ideal formula for attaining Israeli-Palestinian peace, but it can provide a powerful forum for expressing solidarity in the face of war.
Situated on the Naval Academy campus, not far from where the meeting’s delegates gathered, is America’s oldest war monument. Carved out of marble in 1806, the 30-foot-high column commemorates the Navy’s victory in America’s first war in the Middle East — against the pirates of Tripoli.
Today, 200 years later, the United States is again taking the lead in rallying opposition to another rogue state in the region. The Barbary Wars, as they were called, lasted a long time, flaring off and on from 1801 to 1815.
The struggle against Iran inaugurated at Annapolis is only just beginning.