Lady Gaga: World is wrong about Israel
"Tel Aviv was magnificent, star singer says in interview, and its people are ‘in good spirits’

“Oh it was fantastic!” said Lady Gaga in an interview published Friday by The Independent, talking about her September 13 performance in Tel Aviv. “Tel Aviv was magnificent. The world view of Israel is just not reality. It’s in a beautiful place, the people are in good spirits.”
"I had a very emotional show with those fans. It was wonderful,” she said.

The 28-year-old singer also said her duet at the Tel Aviv show with famed crooner Tony Bennett was not planned, but was rather his idea.

“And I was very overwhelmed when Tony surprised me there. I knew he was coming in [to Tel Aviv] for a show, but he came a day early and he said: ‘Hey, you wanna sing “Anything But Love” at the ArtRave?’ And I thought: ‘Gosh, how magnificent! To bridge the jazz and the pop world at the same time.’ And at that show there were 25,000 people singing every word.”

On September 19, she released an album, “Cheek to Cheek,” with the singer.

Gaga told AP in a recent interview that she “felt a beautiful energy” in Tel Aviv, prompting The Times of Israel’s editor, David Horovitz, to publish a paean to her.

Gaga, the multi-platinum, multi-hued, multi-talented artist formerly known as Stefani Germanotta, was the first big-name star to confirm a show in Israel after this summer’s 50-day war with Hamas forced the cancellations or postponement of shows by Neil Young, The Backstreet Boys and Lana Del Rey, among others.

Gaga, who last played Tel Aviv six years ago, put on a show that was so big and bright, it almost made up for those cancellations.

Sauntering on stage at 9:40 p.m., in the first of several blonde wigs and sequined, space-age like bodysuits, she launched into “ArtPop,” her world tour’s signature track, before belting out “G.U.Y. (Girl Under You),” as a bevy of bare-chested male dancers gyrated and convulsed around her.

Like many of this summer’s pre-war musical acts, including The Rolling Stones and Justin Timberlake, Gaga sprinkled bits of Hebrew into her show, opening her performance by telling the crowd “Ani ohevet et’chem” (I love you) and closing off several of songs with the words “Todah Rabah” (thank you very much).

“Put your hands up and cheer for yourselves,” she told the crowd. “You are strong, you are brave, you are confident, and I f*cking love you, Israel.”

Debra Kamin and AP contributed to this report. 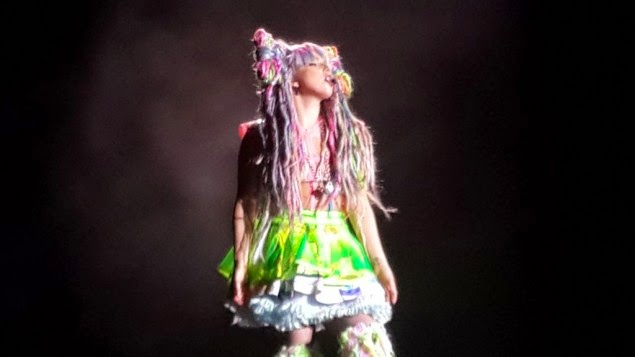 According to retired Gen. Wesley Clark, the United States air attacks are designed to degrade and destroy the infrastructure of the terrorist groups, including the electric grid, the sources of their finance, and other mixed military-civilian targets.

When Israel attacked Hamas military targets, including some that had mixed uses, it was condemned by the same Arab nations that participated in the joint United States-Arab attack in Syria.

Among the most hypocritical nations participating in the U.S. attack is, of course, Qatar, which not only condemned Israel for defending its civilians against Hamas rockets and tunnels, but actually funded the Hamas attacks and provided asylum for the Hamas terrorist leaders who ordered them.

Hypocrisy is nothing new when it comes to the double standard applied by the international community against Israel. The United States and its Arab partners have the right to take preemptive action against terrorist groups without fear of U.N. condemnation, a Goldstone report, or threats to bring its leaders before the International Criminal Court.

Yet everything Israel does, regardless of how careful it is to minimize civilian casualties, becomes the basis for international condemnation.

If the U.S. attacks in Syria continue, there are likely to be civilian casualties, because ISIS will embed its fighters among civilians and the many hostages it has taken. When that happens, American and Arab rockets will kill some civilians. It will be interesting to compare the world’s reaction to those civilian deaths with its reaction to deaths caused by Israeli rockets hitting human shields deliberately employed by Hamas.

If the past is any predictor of the future, the ratio of civilian to terrorist deaths may be considerably higher in the American lead air attacks than it was in the Israeli air attacks. In past wars, such as those in Afghanistan, Iraq, Pakistan, and the former Yugoslavia, the ratio of civilian to combatant deaths was far higher than the ratio brought about by Israeli rockets firing into Gaza where human shields are Hamas’s tactic of choice.

Special: What This Soldier Did When He Came Home From Iraq . . . (Surprising)
It will also be interesting to see the reaction of the international community and various NGOs to U.S.-led attacks on mixed military-civilian targets, such as electric grid and sources of financing.

The international law on these subjects is vague, open-ended and thus subject to selective application. Doubts are always resolved against Israel and in favor of other nations engaging in similar military actions.

The joint attack by the United States and the handful of Arab countries may finally persuade the world that the laws of warfare must be adapted to the new realities of terrorism.

If one were to literally apply the words of Section 51 of the U.N. Charter, no country could defend itself against imminent attacks, either by terrorists or conventional armies. That section requires an armed attack by an enemy state to have occurred before the right of self-defense kicks in.

That provision was unrealistic when drafted and it is far more unrealistic now in the face of terroristic threats. The laws of war also require proportionality, which is defined as demanding that the anticipated deaths of civilians be evaluated against the military value of the target. But it does not take into account situations where the enemy hides its valuable military targets behind human shields.

It has been easy for the international community to apply these rules rigidly and unrealistically when the only country to which it applies them is the nation-state of the Jewish people.

But now it will have to apply them across the board, and that will require defining them in a sensible and realistic way that does not give undue advantage to terrorists who refuse to comply with the rule of law.