This is a great Blog.
Check it out!
It shows that there Are indeed decent Muslims.
Posted by Unknown on 10:04:00 AM No comments:

Israel: We Are Ready For Iran, Syria, Hezbollah

Everyone wants peace.
There is a new blog, out of Gaza and Sederot, that is wading in, trying to bring peace.
The end of Jewish existence in Israel is not negotiable.
How can there be peace when even the moderates, i.e., Abbas, say there should not be a Jewish State?
Hamas bombs innocent civilians every day.
The Jews want peace, but they would be foolish to make any concessions to Hamas, whose goal is to destroy Israel.
If the Arabs want peace, stop the bombing, stop the murder.
It seems to any objective observer that the goal of Arabs is peace, yes, but without Jews.

The New Blog is at:
www.gaza-sderot.blogspot.com
Posted by Unknown on 10:30:00 AM No comments:

A New Era For America

Our condolences to the family of Rep. Tom Santos, who passed last night.
Rep. Santos is the only Shoah survivor to be elected to Congress.
We mourn his passing.


As the Republican party prepares itself for their denouement, the end of their stranglehold on the white house, one ponders who the next President will be, Senator Obama or Senator Clinton.
The self-immolation of the Republicans was fascinating and inevitable.
Mike Huckebee, for example, admitting in one debate that he couldn’t comprehend the science of evolution, and in another saying that the constitution should be amended to conform to the Bible.
It’s one thing to believe that a collection of fairy tales is factual, it’s quite another to insist that people who don’t believe it should be governed by it.
He completely failed to grasp the section of the Bill of rights that wisely separated church from state.
Romney dropped out of the race last week, to spare the country the possibility of a Romney presidency.
Mr. 9’eleven, Guliani, misjudged American’s fears about 9’11, and the Republican Party’s tolerance of cross-dressing and serial marrying.
The Ron Paul freak show never really got off the ground.
McCain’s dreams of the “hundred year war” basically insured his defeat, while showing how completely out of touch he is with the American people.

With the Republicans defunct, it remains for the Democrats to unite and elect the Democratic nominee. 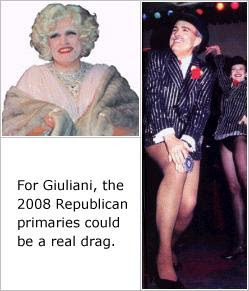 I forced myself to view a dvd entitled, “Defeating the Left’s Plan to Kill Conservative Talk Radio”.
I won’t deny that it was funny.
But it was pathetic as well.
It demonstrates why many people call the present day conservatives “The Land of the Living Dead.”
No one really knows what “Conservative” means anymore.
To Ann Coulter it means destroying anyone who is different.
To Huckebee it means a Christian theocracy on the model of the Islamic states.
To John McCain, who is trying to convince the “right” that he is as silly, irrelevant and wacky as they are, “conservative” means fighting wars with no other strategy than “staying one hundred years”.
To Bush it means, “Nudge, nudge, wink, wink, Say no more.”
To most “conservatives” it means a huge government bureaucracy to control those with out “means”, particularly if they are leftists, atheists, Jews, whores, homosexuals, feminists, drifters or free-thinkers.
The last true Conservative was Barry Goldwater.
He believed in smaller government and less interference in American’s beliefs and lives.
Today’s “conservatives” would call Barry Goldwater a “far leftist”.
Most conservatives consider Reagan as the paradigm of a conservative.
I would agree with that assessment.
He also demonstrated that one could be a leading conservative thinker while suffering from Alzheimer’s disease, as he was during the last two years of his Presidency.
One suspects that the truly intelligent conservatives, i.e., Laura Ingram and Bill Buckley, ( I believe they are the only two…are their any others?) are either true conservatives, in the Goldwater mode, or hustlers.

The “conservatives” of today want to jail women for having abortions.
They want to force non-Christians to pray in our schools.
They want to strip gays of any rights or equality.
They fear to negotiate, and only negotiate out of greed.
Although there is, as far as I can tell, not a single follower of Socialism or Communism within the Democratic Party,
The conservative whine is always, “They are Socialists. They want health care for poor people, they want decency in human relationships, they want people to be free to choose, they want to smoke Marijuana and not go to prison for it!”
It appears certain that either Hillary or Obama will be our next president.
G-d willing those who’ve been brainwashed by the onslaught of propaganda from the “conservatives”, will be able to finally see through the fog, and America can start on the road back to normalcy, decency, and freedom for its citizens.
Posted by Unknown on 1:31:00 PM No comments: