Abbas hopes to meet Olmert as rocket fire threatens truce with Israel
Posted: 21-12-2006 , 20:11 GMT
Palestinian President Mahmoud Abbas said Thursday he hopes to hold a summit with Israeli Prime Minister Ehud Olmert by the end of the year. The two leaders have expressed readiness to hold their first summit for months.

"We always showed our willingness to hold this meeting with Olmert, and it's no secret that we hope it will take place before the end of this year," Abbas said at a news conference with the visiting Italian foreign minister, Massimo D'Alema. "There is progress in preparations for this meeting."

According to Abbas, he wants Israel to free hundreds of Palestinian prisoners, but Olmert has ruled out a prisoner release until Hamas activists release an Israeli soldier they captured last June.

Meanwhile, a Palestinian rocket aimed at Israel landed on a home in the northern Gaza Strip on Thursday, moderately wounding a 2-year-old boy sleeping in his bedroom, hospital officials and residents said, according to the AP.

The rocket fire further strained a cease-fire reached between Israel and Palestinian groups late last month. Israeli officials say Palestinians have fired more than 40 rockets since the Nov. 26 truce, and Olmert warned this week that his patience is wearing thin.

On the internal front, Gaza remained calm Thursday on the second day of a renewed truce between the Palestinian rivals. 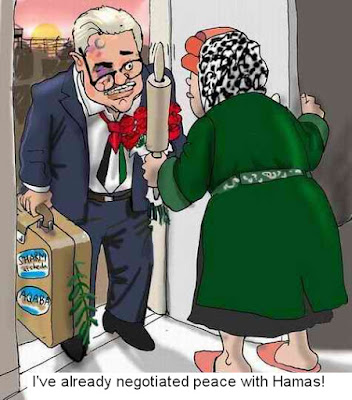 The chairman of the Palestinian central elections committee says that technically he needs at least 140 days to prepare the polls, which Hamas vows to boycott.

Hamas’s flat rejection of Abu Mazen’s authority to call early elections for the president and parliament and the consequent factional violence is polarizing Palestinian territory. DEBKAfile’s military sources report two rival government administrations taking shape – Hamas in the Gaza Strip, where Fatah-controlled Palestinian Authority officials are being driven out; and Fatah on the West Bank - although Hamas controls some enclaves. Fatah leader Mohammed Dahlan, who is under sentence of death from the Hamas religious council, addressed a demonstration in the West Bank town of Jenin Sunday, Dec. 17, and called on all Palestinians to back the Abbas-Fatah cause against Hamas.

Palestinian security officers and public sector officials are reaching a point where they can no longer sit on the fence but must declare loyalty to one faction or the other. Many will be influenced in their choice by which of the two can pay their wages. Hamas’ exchequer is known to have been stuffed by at least quarter of a billion dollars – and maybe more on the way - deposited by Iran. DEBKAfile’s Palestinian sources disclose that Abu Mazen is preparing to draw for the first time on the multibillion dollar Palestinian Development Fund, whose capital is invested in many parts of the world, for paying security officers and expanding Fatah’s grass-roots base.

The guns reached Dahlan who handed them over to the faction’s suicide wing, al Aqsa Martyrs’ Brigades, Abbas’ only reliable strike force. Dahlan is now in command of the armed campaign against Hamas from presidential headquarters in Ramallah. Israeli officials are turning a blind eye to transfer of the arms into the hands of the most badly-wanted masterminds of Fatah suicide killings, such as Jemal Tirawi from Nablus.
Posted by Unknown on 12:20:00 PM No comments:

It seems to me that antisemitism is making a major resurgence these days, and even gaining some acceptance.
Not in this order but, Mel Gibson makes his anti-Jew attacks, makes a very, IMO, muffled "apology" and the whole thing is forgotten.
Disgracefully, Jimmy Carter produced one of the most virulent attacks I've heard, ever, from any politician.
He actually claimed that the "Jewish Lobby" controls American Policy.
I find this trend extremely disturbing.
About the "Jewish Lobby".
There is some truth to the old gag, "What do you get when you put two Jews in a room?"
Answer, "An argument."
There is no foreign policy consensus on the part of the "vast Jewish/Zionist lobby."
The article below takes on some of the major concerns I see developing.
Michael

Ku Klux Klan leader and other Holocaust deniers gathering in Iran, former President Carter's controversial new book calling the situation in Palestinian territories apartheid, and a former secretary of state who says the Arab-Israel conflict is standing in the way of victory in Iraq are examples of anti-Semitism becoming more pervasive, the head of the Anti-Defamation League said last night at Temple Sholom."Anti-Semitism is today no longer a page of history, it is a history of today," said Abraham Foxman, the league's outspoken national director who Foxman has been national director since 1987 and has worked for the league since 1965.Gavriel Rosenfeld, a Fairfield University professor and chairman of the volunteer committee that helped organize the event, said, "To put it perhaps in the post-9/11 terminology, he's one of the Jewish community's most valuable first responders."Foxman was saved from the Holocaust as an infant by parents who gave him to his Polish nanny, who raised him as a Catholic. His parents survived and later reunited with him.With such a background and belief that strides have been made in combating anti-Semitism, Foxman said he has been surprised that the barrage of anti-Semitism is daily, constant and growing."Google Holocaust, log on to Holocaust and you will find 'anti-Holocaust'," he said. "Better, Google Jew and first you will find out about anti-Jews and anti-Semitism. ... The logarithm of this new invention, which is supposed to be a boon to knowledge, has an underbelly, which is a superhighway for hate."Events across the world have threatened to heighten anti-Semitism and present a threat to Jews across the world, Foxman said.Iran's president sponsored a conference in Tehran, inviting participants such as David Duke, a former leader of the Ku Klux Klan, and other people who believe the Holocaust didn't occur."Yesterday in Tehran, (Presi-dent Mahmoud) Ahmadinejad along with the conference reminded his audience that God has proclaimed that Israel has to go," Foxman said. "Just as the Soviet Union disappeared, so does the Jewish state."Foxman also repeated his public criticism of Carter's new book, "Palestine: Peace Not Apartheid." Carter has said he wrote the book because he believes the media squashes anti-Israel discourse."It's classic anti-Semitism and it doesn't come from David Duke, it doesn't come from Pat Buchanan, it comes from this sweet, smiling peanut farmer," Foxman said.Finally, Foxman also accused the Iraq Study Group, which is headed by former Secretary of State James A. Baker III, of unfairly blaming Israel and Jews for the war in Iraq. The group's report said the United States must address the Arab-Israel conflict in order to succeed in Iraq."You want peace in Iraq, you've got to resolve the Arab-Israel conflict," Foxman said. "What kind of nonsense? But it's not nonsense, we are being blamed again."Though Foxman said that he is concerned by what he sees, he has optimism in the future."As dark as the clouds get, when we look at who we are and what we believe, we shall and we will overcome," he said. "Happy Hanukkah. Thank you."
Posted by Unknown on 12:35:00 PM No comments: