U.S. Will Move Embassy to Jerusalem in May, Marking Israel’s 70th Birthday 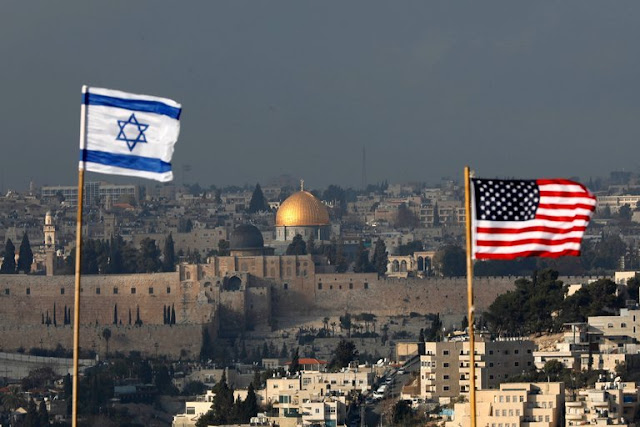 Long before Arab marauders slaughtered their first Jewish victims,
Jerusalem was the capital of Israel.
There has never been a Palestinian State, and NEVER will be a Palestinian State inside of Israel.
Jerusalem has always been the capital of Israel.
It really is time for America to be realistic and stop playing “nice” with the Arabs, we don’t need their oil anymore, and they don’t share our values.There are no Palestinians, there  are Arabs occupying Jewish land in Judea and Shomron and Gaza that call themselves “Palestinians”.
They should relocate to live in a country where they have the same aspirations as the inhabitants,  i.e. Jihad, “martyrdom” misogynism, intolerance and  “religious” warfare.
mfbsrWASHINGTON — The Trump administration plans to officially move the United States Embassy in Israel from Tel Aviv to Jerusalem in May to mark the 70th anniversary of the creation of the state, two American officials said on Friday.The timetable is earlier than the one offered as recently as last month by Vice President Mike Pence, who said during a visit to Israel that the embassy would open by the end of 2019.The State Department will formally designate a facility in Jerusalem’s Arnona neighborhood, currently used for consular affairs, as an embassy, even as plans proceed to eventually build a new compound that could take several more years to open.President Trump on Friday boasted of his decision to recognize Jerusalem as the capital of Israel during a speech at the Conservative Political Action Conference in Maryland, drawing enthusiastic applause.While other presidents held back from such a move for fear of triggering a backlash among Arabs and prejudging final peace negotiations between Israel and the Palestinians, Mr. Trump said he defied “incredible” pressure to do what he considered the right thing.“You know, every president campaigned on, ‘We’re going to recognize Jerusalem as the capital of Israel,’ everybody, for many presidents, you’ve been reading it, and then they never pulled it off, and I now know why,” Mr. Trump said. “I was hit by more countries and more pressure and more people calling, begging me, ‘Don’t do it, don’t do it, don’t do it.’ I said, ‘We have to do it, it’s the right thing to do.”The Israeli Foreign Ministry declined to comment. But a member of Prime Minister Benjamin Netanyahu’s coalition welcomed the plan to go ahead with an embassy move. American officials on Friday did not comment on why they decided to move up the date for the opening, but it will carry special emotional resonance in Israel coming on its Independence Day on May 14, the anniversary of the state’s founding in 1948.President Harry S. Truman recognized Israel minutes after it declared independence, making the United States the first country to do so.A new embassy building will take six to eight years to construct, said a State Department official, who like others demanded anonymity because she was not authorized to discuss the issue.The Arnona building, where visas and passports are processed, is not nearly big enough for the embassy’s entire staff. Only the ambassador, a chief of staff and a staff secretary will be situated there in its first years of operation, the official said. Much of the rest of the embassy personnel will remain for now in Tel Aviv.Israel has always made Jerusalem its capital but the Palestinians have also claimed the city as the capital of a future state. Until Mr. Trump’s decision last year, no other country located its embassy in Jerusalem to avoid seeming to take sides in the dispute.Most American peace negotiators have assumed that Jerusalem would ultimately serve as capital of both Israel and a Palestinian state in an eventual agreement, but advised against preemptively declaring it the Israeli capital before negotiations are finalized.Meanwhile, the Trump administration is in preliminary discussions with Sheldon Adelson, a casino magnate, Republican donor and prominent Israel backer, for a donation to potentially pay for at least some of the cost of constructing a new embassy complex, the State Department official said. The Associated Press reported that State Department lawyers are looking into the legality of such a move.Mr. Adelson declined to comment on Friday through a representative.VideoSheldon Adelson’s Influence on Trump’s Israel PolicyWhen President Trump formally recognized Jerusalem as Israel’s capital, one man who was probably smiling was the Republican mega-donor Sheldon Adelson. Here’s a look at how he became influential within the Trump administration. By NILO TABRIZY on Publish Date December 6, 2017. Photo by Doug Mills/The New York Times. Watch in Times Video » EmbedBut one of his confidants said that Mr. Adelson “was very excited” when Mr. Trump told the casino magnate after his election victory that he would move the embassy.The confidant, Morton A. Klein, said Mr. Adelson “called me as soon as he walked out of Trump Tower, and got into his car to say that President Trump said that he is going to fulfill his promise to move the embassy.”“It is a critically important issue to Sheldon Adelson,” said Mr. Klein, who runs a nonprofit group called the Zionist Organization of America that is funded partly by Mr. Adelson.Mr. Klein, though, said he opposes private funding for the embassy.“I’m concerned that people will think that this is being done because of a group of people — evangelicals and Jews — who care about it and not because it’s the U.S. government that cares about it,” said Mr. Klein. “It should be crystal-clear that this is the U.S. government making the decision to move it.”Follow Peter Baker and Gardiner Harris: @peterbakernyt and @GardinerHarris.Isabel Kershner contributed reporting from Jerusalem and Kenneth P. Vogel from Washington.By PETER BAKER and GARDINER HARRISFEB. 23, 2018
Posted by Unknown on 5:32:00 PM No comments:

Is trump Stupid Enough to Be Manipulated By His Staff Into Unwittingly Committing Treason? 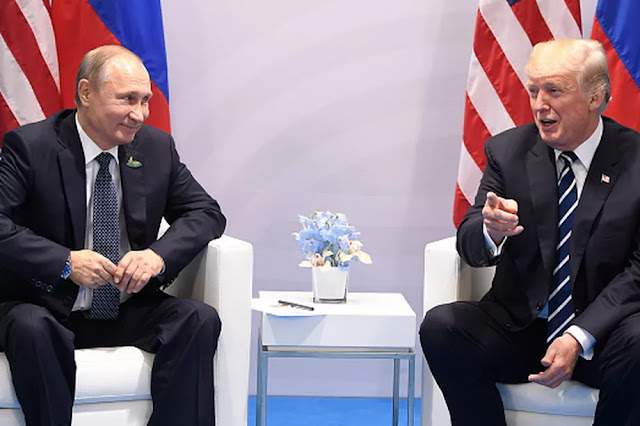 Trump is not an intelligent man, anyone with any intellectual foundation at all would agree with that.That being said, no one can deny that he has no moral standards either.The inability to think clearly, together with his lack of morals, makes him the perfect target, the ideal chump.mfbsr
Trump is incredibly easy to manipulate.One of the best sub-genres of Trump reporting is “leaks from Trump staffers that suggest the president is an overgrown toddler.” We learned last week that Trump receives two scoops of ice cream for dessert while guests receive only one scoop. The newest entry to this budding literature is just as pathetic, but infinitely more troubling.Politico’s Shane Goldmacher has a great story about Trump’s media diet—and the ease with which fake news has slipped in to it. Trump is barely computer literate (and that’s being charitable) and he explodes when presented with negative coverage. These two characteristics have made him enormously susceptible to manipulation. During the campaign, for instance, his aides learned that they had to mix in positive coverage, or Trump would become unhinged—and then start ranting on Twitter. The Twitter rants would then produce more negative coverage, creating a vicious cycle of idiocy. This was bad enough, but now Trump has significantly more power and he’s presiding over a dysfunctional White House where staffers are constantly fighting with each other. As a result, his aides have used Trump’s media diet to do two very unnerving things.The first is to use media to turn the president against their enemies inside the administration—or against people they don’t want joining the team. “A news story tucked into Trump’s hands at the right moment can torpedo an appointment or redirect the president’s entire agenda,” Goldmacher writers. “Current and former Trump officials say Trump can react volcanically to negative press clips, especially those with damaging leaks, becoming engrossed in finding out where they originated.” Trump aides circulated a story from right-wing troll Charles Johnson to drive deputy chief of staff Katie Walsh, who Johnson accused of being behind leaks, out of the White House.The second is to use fake news to manipulate Trump himself. K.T. McFarland—who currently serves on the national security council but is expected to be appointed ambassador to Singapore—presented Trump with two Time magazine covers. One, which was presented as being from the 1970s, “warned of a coming ice age; the other, from 2008, about surviving global warming.” It was a juxtaposition tailor-made for Trump—the media’s hypocrisy in two images. The problem, Goldmacher writes, is that the ice age cover was a hoax. Trump was predictably irate, but staffers intervened before he could act—and embarrass himself and the administration by tweeting fake news. The White House doesn’t seem to see the problem here. One official told Goldmacher that this wasn’t a big deal because the story was “fake but accurate.”The problem is Trump, certainly, who doesn’t seem to be able to discern the difference between real and fake news, and whose chaotic managing style has resulted in a system in which staffers are given incentives to provide the president with fake news. But the other problem is with the staffers themselves. There are no adults in the room with the president: Instead one unhinged conspiracy theorist is being manipulated by dozens of other conspiracy theorists.

Alex Shephard
Posted by Unknown on 8:18:00 PM No comments:

Trump says he’s never doubted Russian meddling. Here are the multiple times he has. It’s on tape, in tweets, and in transcripts. 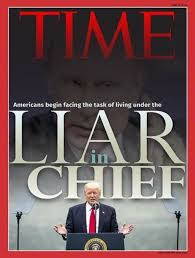 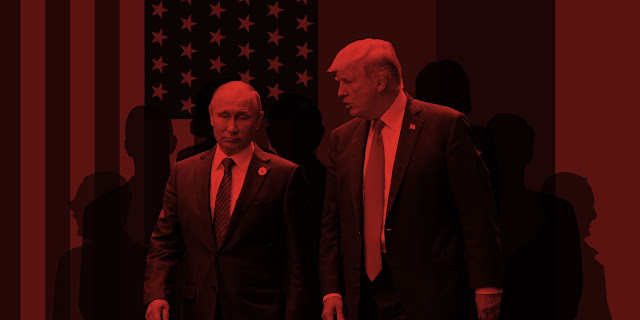 In many aspects, the traitor who is trying to destroy America, Donald Trump, is different in ways that are starkly obvious.
Nixon and Clinton were intelligent, and they were pro American.
Trump is amazingly stupid, and he prefers dictators and killers as leaders.
Every day he attacks our American institutions, the FBI, the CIA our police and military, knowing that only a tiny minority of barely literate “fans”  believe anything that comes out of his lying mouth.
The evidence is overwhelming, the longer this treasonous liar remains in office, the more damage he does to our country.
TRUMP SHOULD BE ARRESTED, CONVICTED OF TREASON,
AND EXECUTED.
MFBSR

The fact that such an unstable egomaniac occupies the White House is the greatest threat to U.S. national security in modern history.