BRITAIN GETS TOUGHER ON RADICAL ISLAMISM

Barry Rubin is director of the Global Research in International Affairs (GLORIA) Center and editor of the Middle East Review of International Affairs (MERIA) Journal. His latest books are The Israel-Arab Reader (seventh edition), with Walter Laqueur (Viking-Penguin); the paperback edition of The Truth About Syria (Palgrave-Macmillan); A Chronological History of Terrorism, with Judy Colp Rubin, (Sharpe); and The Long War for Freedom: The Arab Struggle for Democracy in the Middle East (Wiley). To read and subscribe to MERIA, GLORIA articles, or to order books, go to http://www.gloria-center.org
Partial Bibliography
http://www.youtube.com/results?search_type=&search_query=Daud+Abdullah&aq=f
http://www.socialcohesion.co.uk/files/1235582443_1.pdf
http://www.hurryupharry.org/2009/03/26/daud-abdullah-twists-and-turns/
http://online.wsj.com/article/SB123802056395641639.html
http://www.timesonline.co.uk/tol/news/world/middle_east/article5454204.ece
http://www.dailymail.co.uk/news/article-1164613/Hazel-Blears-cuts-ties-Muslim-Council-Britain-refuses-condemn-controversial-senior-member.html
http://www.socialcohesion.co.uk/mt2/mt-search.cgi?blog_id=1&tag=Daud%20Abdullah&limit=20

I don't want to insult anyone or patronize anyone.
I am pretty sure everyone has read read enough about the issue of money being given to the Palestinians to be aware of safeguards and other issues regarding the 900 million dollars going to the PA.
I don't believe Obama wishes to destroy Israel.
There are leaders in Israel who have called for the creation of a Palestinian State.
I haven't heard anything from President Obama that I haven't heard, in an even more extreme view, from inside Israel.
Too many people on the left and the right solidify their opinion and reinforce it by only reading from a source that backs them up.
That may feel good, but it is not the same as being informed.
I don't know if we will ever have a President who has actions regarding Israel that will meet with my total satisfaction, we haven't yet.
I do know, however, that if we did have such a President, he would meet with LOTS of opposition within Israel.
I think the best option for Israel is annexation and a State of Israel from the sea to the river.
But I am not the most powerful man in the world with a host of competing factions with opinions as strong as likud's on the one hand and Peace Now on the other, and a world full of other issues to decide.
In short, I think Obama is doing the best he can under the circumstances, and like Bibi Netanyahu, I think the Secretary of State understands the issues and is a good friend of Israel.
I see the 20% or so of Americans who view Obama as, whatever they view him as, an "uppity nigger" or the reincarnation of Joseph Stalin, are not being helpful.
I do not believe that compassion is a bad thing.
I do not believe that it is a weakness.
I don't believe government action is always bad.
Like most Americans, according to a recent WSJ poll, I believe most of America's problems were inherited from Bush, and I believe that Obama is a decent. intelligent man, who is trying to stave off a severe depression.
I believe Americans should unite behind this President, and I believe they are doing so.
We've got to find common ground.
Not neutral ground.
Common ground.
During and before Cast lead, Jews united, they cast aside name calling and united around the idea of survival and self-defense.
FM Livni was the staunchest supporter for the Operation, she didn't want it to end when it did.
The Jews have found a way to unite for thousands of years, to survive.
The U.S. has been a country for over 200 years, but our existence is under attack as well.
I could go on, but everyday I see the strains at the fabric of our society, and something is going to give.
I see ignorance and hate, I see it up close.
At this time, for different reasons, more Americans are united than ever before, and see common threats and common goals,
I believe that this should be encouraged, and is necessary for the U.S. to come back from the precipice.
Posted by Unknown on 10:47:00 PM No comments: 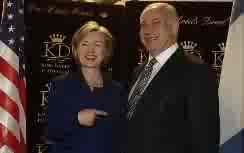 Clinton met with Prime Minister-designate Binyamin Netanyahu today.
Netyanyahu said the Secretary of State showed a deep understanding of Israel and America's common goals and said that he was satisfied with the meeting.
Netanyahu did not reveal the content of his discussion with Clinton other than to say that
the two had spoken about “the Iranian issue and the Palestinian issue” and had agreed to meet
again once a new government has been formed.
Netanyahu described the talks as “deep, important and good.”
"We need to think creatively in order to move forward and create a different reality, both in
terms of security and politically,” Netanyahu said Tuesday.
Posted by Unknown on 7:00:00 PM No comments: 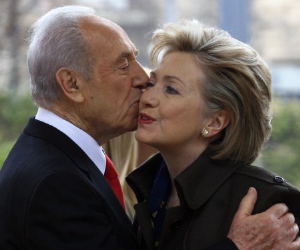 United States Secretary of State Hillary Clinton placed responsibility to return calm to the region on Hamas’s shoulders, saying that Hamas must stop the rocket attacks on Israel.
Speaking at a press conference Tuesday afternoon she stated, "The first step is a durable peace, but that can only be achieved if Hamas ceases the rocket attacks.”

Secretary Clinton also called for a halt in the smuggling of weapons from Egypt, which continues despite the Operation Cast Lead counterterrorist campaign and occasional IDF attacks on smuggling tunnels.

Unlike the Bush Secretary of State who sought a “balance” in blame, she did not couple the halt of attacks with the issue of Gaza border crossings.
Israel has restricted shipments of humanitarian aid through the crossings in order to lessen the movement of materials that can be used for terrorist strikes.
Secretary Clinton, in her first visit to Israel since taking office last month, also said she spoke withFM Livni about the Iranian nuclear threat and Tehran’s alliance with Hamas.
She said that the Obama administration is conducting a policy review to determine where it can “productively engage” diplomatic solutions, and that all dialogue will be in consultation with Israel, reiterating her message that Israel's decisions as to her security are hers to make, and that the Obama administration considers Israel's relationship with the U.S. to be strong and special.
Posted by Unknown on 8:46:00 PM No comments:

By Barry Rubin
March 01, 2009
Secretary of State Hillary Clinton has arrived in Israel on the first of what will no doubt be many visits. Beyond the simple self-interest of making her feel appreciated, most Israelis are genuinely glad that she was appointed to this job. The reason why is critical to understanding the future of U.S. Middle East Policy and U.S.-Israel relations.
What is most important is that Clinton is regarded as a realist. She watched her husband try really hard and put his prestige on the line in attempting to achieve an Israeli-Palestinian peace and saw him being made to look foolish by Palestinian leader Yasir Arafat and Syrian ruler Hafiz al-Asad who rejected his proposals. During the presidential campaign she courageously—and to her own cost—tried to explain the dangers to those dreaming only of a fast getaway from Iraq.
Moreover, it’s not just that she spoke positively about Israel—a senator from New York could do no less—but that the way she explained her positions seemed to indicate she really understood the situation.
All things considered, then, one can believe the secretary of state doesn’t accept four myths that some—though not all--of her colleagues in Washington and Europe embrace. She seems to know that:
--The Israel-Palestinian conflict is not the fulcrum of the Middle East whose solution will make Islamism, terrorism, Iran’s nuclear weapons’ program, anti-Western or anti-American sentiments, Iraq’s instability, and all other regional problems disappear.
--The Israeli-Palestinian conflict is not easily solvable by pressure, the perfect plan, or hard work. Not only is peace not at hand, it isn’t even at arms’ length.
--Whatever part of the blame for continued conflict is due to Israel, a very large and decisive portion rests on the Palestinian side for reasons including the weakness of the Palestinian Authority and its leadership, the division into Hamas and Fatah regimes, and other issues.
--Bringing Hamas into the negotiating process is a mistake that would doom any chance for peace and might even bring the Palestinian Authority (PA) crashing down altogether. U.S. interests require that the PA survives as recognized Palestinian leader, while Hamas is an Iranian client whose triumph would hurt the U.S. strategic position in the region.
Secretary of State Clinton also knows that the new Israeli government is not yet in place and her first visit must be dedicated to getting acquainted with leaders and issues.
What are the problems for bilateral relations? A critical aspect is that no matter how skeptical Clinton is of the chances for progress, she wants to make it appear that she is actively engaged and making progress. The thing that will make her furious is that which makes her look bad. And she wants Israel to make her look good.
On some items, this is no problem. A high level of cooperation with the PA, supporting funds and military training for it within reason, is in Israel’s interest. The West Bank economic and security situation is improving. Here, Clinton and Israel should agree.
Her next goal is a bit more difficult but reasonable: that Israel should dismantle more settler outposts, as Israel has promised. True, this presents political difficulties and potential confrontations with settlers, yet Israel’s government should assert its authority. A serious effort on this front would bring a positive return from Washington with no cost to Israel’s security.
Beyond this, the United States is likely to ask for Israel to stop expanding settlements, even for natural growth. Since the peace process’s start 16 years ago Israel has publicly asserted that building homes for "natural growth," new adults on existing settlements, is part of the Oslo agreement.
If this were to change, Clinton could claim a victory of stopping settlements, usually portrayed by the PA as its main grievance, that is, excuse for not doing more itself. Such a concession should not be unthinkable but the question is what would Israel get in exchange? U.S. pressuring the PA to stop officially inspired anti-Israel incitement; changing its schools and media to advocate a two-state solution; greater U.S. backing for Israel’s security regarding Gaza? Asking Israel to do something on the settlement issue is all right if—but only if--there is more real compliance from the Palestinian side.
Finally and importantly there is the question of Gaza. Clinton wants some quick success on that front, namely a ceasefire and resolution of humanitarian problems there. It will be tempting for her to insist that Israel reopens crossings unconditionally, without a real ceasefire or any release of Hamas’s Israeli hostage. And Israel will explain why it has legitimate concerns which must be realized, lest a new war crisis emerge.
Of course, the two governments must begin to reach understandings about Iran. The new administration is determined to try engaging Tehran. Israel must convey the point that Washington should be alert to Iranian efforts to bully or fool the new president. The goal of stopping Iran’s nuclear weapons’ drive has to be the top priority; unilateral concessions in exchange for nothing should be avoided.
And the White House will hopefully not be shy in admitting when it finally concludes that Iran doesn’t want to be friends. President Barack Obama has spoken of opening Iran’s clenched fist. The danger is that Iran will do so only in order to slap America silly.
Early on this administration must comprehend that reputations will not be built, Nobel Peace Prizes won, or Arab and European cooperation won by sacrificing Israel’s vital interests. In exchange, Clinton must see that Israel wants to make her look successful and to cooperate on reasonable terms. On such a basis of understanding and good will a very successful partnership can be built.