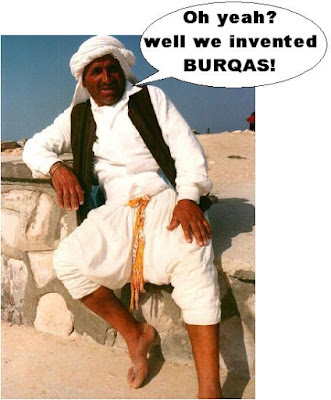 There are very few things that would make me happier than to see the Arabians as a happy, peaceful, joyous people, enjoying the gifts of life and family and everything else.
Because if they were happy and joyous and peaceful everyone would be better off.
The problem is getting through to Arabians who are nice even though they have been taught from infancy to hate.
They still believe the majority of the arabian and leftist propaganda, even if, one hopes, they are not as violent as their brethren.


I've never seen anyone with the level of indoctrination that most Arabians have, be swayed by facts and logic.
But, If we can show arabians the truth, maybe we can get them to join the rest of the human race.

If not, at least we can help those who've not made up their minds yet to be aware that the level of intentional atrocities, such as beheading innocent people, torturing and intentionally murdering children, encouraging children to blow themselves up while killing and maiming as many innocent bystanders as possible and the list goes on, that this behaviour is not noble, it's not moral,
it's criminal behaviour.
I don't hate arabians, but logic indicates that the type of activities we've been discussing, i.e., sawing the heads off of innocent civilians, turning children into human bombs , etc. require suppression.
Those we call "jihadists", commit crimes of great brutality, but we often see crowds of people in arabia cheering their heinous deeds.

So I believe there are Arabs that don’t hate Jews.
But the Arabs in power, all of them, and the vast majority of Arabians, according to most estimates do hate Jews.
Their motives are expressed as sometimes not even thinly veiled, sentiments consistent with deep, violent hatred of the Jewish people.
The Israeli gov't is a human institution, therefore Israelis make mistakes, they are no doubt in the wrong in some way at a given time, the question before us, however, is are the brutal actions of the popular, in the Arab world, criminal gangs throughout Arabia and the world, and whether it is ever justifiable to perform the atrocities they routinely perform.
The photograph of an Arabian identifying himself at a checkpoint,
next to a photograph of children blown to bits, shows what many Arabians believe is a quid pro quo,
i.e.., Arabians humiliated at checkpoints have the right to blow up a disco full of children.
It’s pretty well known, that if Palestinian “militants’ had practiced civil disobedience
Instead of murder as a redress for their grievances there would now be an Arab Palestine
State.
By now, if it had been a peaceful neighbor, it would be a state blessed by peace, prosperity, and new-found ties with it’s democratic neighbor.
It would probably be the most successful state in Arabia, because of it’s proximity to and interactions with Israel.
To paraphrase Golda Meier “The Arabs will only find peace when they learn to love their children more than they hate the Jews.”
Posted by Unknown on 4:32:00 PM