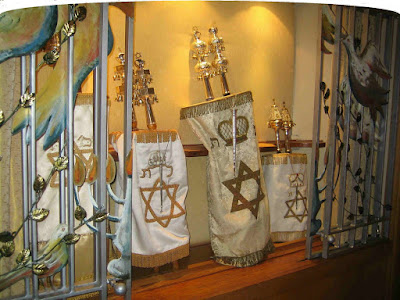 For the first time, Jews worldwide can celebrate Yom Kippur by streaming a Los Angeles service Friday via the Internet.
At 4:45 p.m. PDT, JewishTVNetwork.com will broadcast the Kol Nidre service from the Wilshire Boulevard Temple, the oldest synagogue in L.A.

"We're very excited," said Jay Sanderson, chief executive officer of JTN Productions of Sherman Oaks, owner of the online network. "Jews and non-Jews around the world will be able to hear and see the service - someone who's in a nursing home, someone who is in Topeka, Kans., who has no synagogue near them."
The 80-minute service will be available to anyone with broadband Internet access at www.jewishtvnetwork.com/. Many conservative and orthodox synagogues prohibit cameras during services in accordance with interpretations of Jewish law. But the reform Wilshire Boulevard Temple has consented to permit video cameras.
JTN Productions, a non-profit production company founded 26 years ago as the Jewish Television Network, launched its broadband Web channel last April to expand on the richness of Jewish traditions. It also hoped to stir dialogue between Jews and non-Jews by publishing an America's Top 50 Rabbi List.
Next year, the network hopes to stream Kol Nidre services from five synagogues from Paris to Jerusalem. "My goal in life is to make Jewish as big as possible and

as public as possible," said Sanderson, of Encino. "I want to push the envelope."
Posted by Unknown on 3:28:00 PM

This is wonderful news, and it's about time.
Baruch Ha-Shem