Garbage in Garbage Out From Iranian Dictator 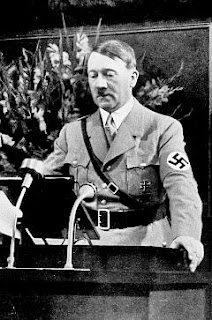 As slimy and circuitous as ever, seeming more like Joseph Goebbels than the leader of Iran,
Iranian President Mahmoud Ahmadinejad has again denied U.S. accusations that Iran seeks to develop nuclear weapons, and is supplying weapons and training to insurgents in Iraq. Ahmadinejad made his comments Monday during a controversial visit to Columbia University in New York. The Iranian Dictator also faced numerous questions about civil rights in Iran and his earlier suggestions that the Holocaust never happened.
Ahmadinejad faced stinging words before he even spoke, from the very man who had invited him.
"Mr. President, you exhibit all the signs of a petty, cruel dictator," said Columbia University Preident Lee Bollinger during the introduction.
Critics are still angry at Mr. Ahmadinejad's suggestion that the Holocaust never happened.
Through a translator Monday, he defended his calls for more research on the topic by suggesting a link between the decades-old Palestinian-Israeli conflict and the Holocaust. "But then why don't we encourage more research on an historical event that has become the root, the cause of many heavy catastrophies in the region in this time and age?" asked the Iranian president. "Why shouldn't there be more research about the root causes? That was my first question. And my second question -- well, given, this historical event, if it is a reality, we need to still question if the Palestinian people should still be paying for it or not. After all, it happened in Europe. The Palestinian people had no role to play in it."
Mr. Ahmadinejad denied Bush administration claims that Iran is training and equipping insurgents in Iraq.
He also again rejected accusations that Iran is enriching uranium, to develop nuclear weapons. "Repeated reports by the IAEA [International Atomic Energy Agency] explicitly say that there is no indication that Iran has deviated from the peaceful path of its nuclear program. We're all aware that Iran's nuclear issue is a political issue. It's not a legal issue," said Mr. Ahmadinejad.
On one topic, Mr. Ahmadinejad drew laughter from the audience. "In Iran, we don't have homosexuals like in your country. (laughter) We don't have that in our country. (boos) "
He also deflected questions about reports of the oppression of women and executions of reporters in Iran, accusing the media of distorting information.
Unfortunately, we cannot report that he was assasinated.
Posted by Unknown on 5:23:00 PM