Another example of Arab child abuse 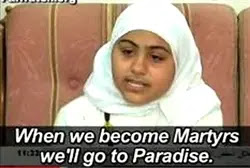 Child Martyr
Screen Captrue
A Palestinian Authority kindergarten showed off what its young students had learned over the past year by having the five-year-olds act out scenes of terror and death for their families. The parents were moved to tears upon seeing their children pretend to die as “martyrs, ”Palestinian Media Watch reported reported.

During the graduation ceremony two plays were performed – one based on “Little Red Riding Hood,” the second, “The Martyr's Wedding,” a story glorifying death in battle with Israel for the sake of Islam.

“Another performance named 'The Martyr's Wedding' delighted the audience due to the role-play of the children, whose acting depicted the reality of roadblocks, children, occupation, soldiers, and the children's death as Martyrs,” wrote the PA daily Al-Hayat Al-Jadida, in a report picked up and translated by Palestinian Media Watch.

The performance was accompanied by “nationalistic” songs, Al-Hayat Al-Jadida reported. Many such songs encourage “martyrdom” and bloodshed for the sake of “freeing the land of Palestine” - a land which, according to the PA, includes all of Israel.
Posted by Unknown on 5:15:00 AM