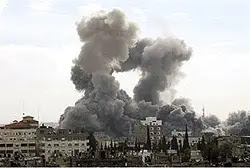 IAF Counterstrike (Gaza)
Israel news photo: Flash 90
IAF aircraft targeted seven terror targets in the Gaza Strip overnight Thursday, the IDF Spokesperson reported.
In northern Gaza, the targets included a weapon manufacturing site and two terror activity sites. In southern Gaza, the targets included two smuggling tunnels, a terror tunnel and a terror activity site.
The IDF Spokesperson noted in its statement that direct hits were confirmed and secondary blasts were identified at a number of the targets.
The sites were targeted in response to the combined terrorist attacks that took place Thursday near the city of Eilat and resulted in the deaths of eight Israelis, as well as the firing of rockets at Israel from Gaza following the attacks.
“The IDF will not tolerate any malicious attempt to harm Israeli civilians and IDF soldiers, and will not hesitate to respond with strength and determination to any element that uses terror against the State of Israel and until calm is restored,” said the Spokesperson’s statement.
“The IDF holds the Hamas terrorist organization solely responsible for any terrorist activity emanating from the Gaza Strip.”
Several hours following the terror attacks, the IDF killed the terrorist commander who presided over the attacks.
The top terrorist was Abu Awad Kamel a-Neirab, commander of the Salah a-Din Brigades, the military wing of the Popular Resistance Committees. He was killed along with two other terrorists and a child who was with them.
In a separate incident overnight Thursday, an Egyptian army officer and two security personnel were killed along the Egyptian-Israeli border. The three had gotten in the line of fire as IDF aircraft were chasing militants along the border of the resort city of Taba in south Sinai and Eilat.

More on this topic