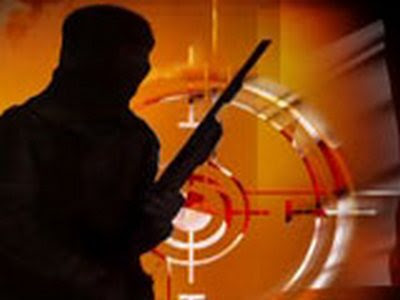 The criminals responsible for the killings and mayhem in Mumbai are being
dispatched and imprisoned, the latest reports say 10 criminals killed and 4 arrested.
So far over 130 innocent victims are reported murderered and over 325 maimed.
Innocent people, unarmed civilians, women and children, brutally gunned down by insane religious fanatics.
The Taj Hotel is apparently secured, the Jewish Center
may still be in the hands of Nazi inspired Muslim gangsters.
Like many citizens of the world I watched CNN coverage throughout most of the night.
It's interesting how Muslim criminals have managed to make mass murder seem
almost routine.
On CNN last night Deepak Chopra called on Muslims to "take action against the criminals in our family"and not just verbally condemn them.
He added" What we have seen in Mumbai has been brewing for a long time, and the war on terrorism and the attack on Iraq compounded the situation.
What we call "collateral damage" and going after the wrong people actually turns moderates into extremists, and that inflammation then gets organized and appears as this disaster in Bombay"He continued to say:Ultimately the message is always toward Washington because it's also the perception that Washington, in their way, directly or indirectly funds both sides of the war on terror. They fund our side, then our petrol dollars going to Saudi Arabia through Pakistan and ultimately these terrorist groups, which are very organized. You know Jonathan, it takes a lot of money to do this. It takes a lot of organization to do this. Where's the money coming from, you know? The money is coming from the vested interests. I'm not talking about conspiracy theories, but what happens is, our policies, our foreign policies, actually perpetuate this problem."

1300hrs,mst, Just now, CNN reports that eight hostages have been rescued from the Jewish Center.
There is reported to be a standoff between the Police and the Muslim Gang members
at this moment at the Jewish center in Mumbai.
Muslim criminals, like their Nazi cohorts, have long blamed "the Jew" for their murderous, bloodthirsty behaviour.
Posted by Unknown on 1:12:00 PM