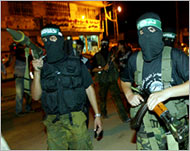 JERUSALEM — The Palestinian Authority president, Mahmoud Abbas, and Prime Minister Ismail Haniya failed Monday in their efforts to finalize a deal on a national unity government but planned to try again today, aides said. Abbas, who leads the secular Fatah movement, and Haniya, who heads the militant Islamic faction Hamas, seemed close to an agreement on a new Palestinian government that would be made up of professionals and technocrats not directly linked to either faction. The new government would seek to end the Palestinians' international isolation and win a restoration of Western assistance cut after Hamas came to power in the spring. "There are issues to be discussed tomorrow and maybe the day after," said Nabil Aburdeineh, a spokesman for Abbas, as the talks in Gaza City broke up Monday night. "We agreed on one thing: a national government of professionals will be coming." Abbas and Haniya announced Sept. 11 that they had reached a tentative agreement or a unity government. But the negotiations quickly stalled with increased fighting between armed Hamas and Fatah groups, and the meeting Monday between the two was their first in weeks. Abbas, whose headquarters are in Ramallah, in the West Bank, travels only occasionally to Gaza, where most senior Hamas leaders are based. Abbas' decision to make the trip signaled that the negotiations had reached an advanced stage. Mustafa Barghouti, a prominent legislator brokering the talks, said earlier on Monday that the sides had already reached an agreement in principle. "Both parties have realized that no one party can lead the Palestinians, and there is a need for a coalition that will include everyone," he said. In another development, Israel began withdrawing tanks and other armored vehicles late Monday night from the northern Gaza town of Beit Hanun, Palestinian security officials said. The Israeli forces entered the town six days ago to halt Palestinian rocket fire and clashed daily with Palestinian militants. It was not clear if all or just some of the Israeli forces were leaving, and the Israeli military did not immediately comment.