Emergency! Israeli Children and Desperate Poor MUST EAT this Passover. PLEASE HELP THEM 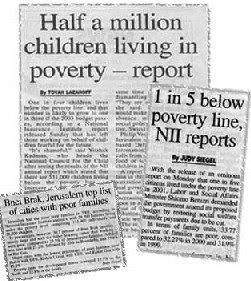 Over 400,000 families in Israel suffer from "nutritional insecurity," a euphemistic term for "hunger." 28% of Israeli citizens, or 1,600,000 people are living in poverty. Among them are more than 600,000 hungry children. Those experiencing "nutritional insecurity" eat smaller portions, skip meals and, in extreme cases, don't eat for a whole day. Diets may be high in carbohydrates and lacking or almost devoid of meat, dairy products, vegetables and fruit. In Israel, 22% of families are deemed moderately insecure and 8% suffer from severe insecurity.
A family's situation is considered moderately insecure when the parents deprive themselves of food to ensure their children get what they need. In families whose situation is severe, the children are deprived as well. 60% of nutritionally insecure are Jewish, 20% are Arab, and 20% new immigrants. 80% of nutritionally insecure people reported a deterioration in their situation in the last 22 years, as Israel economic conditions have deteriorated. About 24% of Israelis are forced to make choices between food and other expenses such as mortgage, rent, medicine, heating and electricity. About half choose to get along with less food. The 'poverty line' in Israel in 2002 was NIS 4,500 a month ($937.50) for the average Israeli family of four - mother, father and two children.
Signs of how severe the problem is are all too apparent on the streets of Israel. Nearly 1,000 people a day come to four soup kitchens at which hot meals are served. It is also commonplace to see older men and women picking through the garbage at outdoor markets in Israel's cities. The collapse of the economy has taken a great toll on the lives of Israel's poorest families, and many children from middle-class families are now joining their ranks. Unemployment in Israel is around 20%, and the difficult economic situation has taken its toll on huge numbers of Israelis.
In 2004, 1.534 million people in Israel lived below the poverty line, the report found. The figure attests to a substantial rise in poverty rates, with 100,000 more poor Israelis in 2004 than there were in 2003. The report also shows that poor families constitute 20.3 percent of Israel's population. The number of children living in poor families has reached 700,000.
With your help Meir Panim will see that these mitzvat will be done:
· 5,000 Passover Baskets will be delivered to the homes of those who need it most.
These baskets include: matzah, wine, meat, potatoes, eggs, and fruit. · 2,500 Participants in Seders that Meir Panim organizes in hotels and synagogues for needy families.
These seders are conducted in a warm and friendly atmosphere. ·
1,000's of "Full Plate" Food Cards distributed to needy families, enabling them to purchase food and other necessary items for Passover.
American Friends of Meir Panim:Doing More Where It’s Needed Most
Free Restaurants Meals on Wheels
Kiryat Gat Food Preparation and Distribution Center Power of Giving Communal Shelters in Kiryat Shmona Meals for Schoolchildren
Practical Guidance for Parents Bridging the "Digital Gap"
Vocational Training for Parents
Donations are tax deductible. Tax ID # 20-1582478
Call Toll Free:
1-877-7-DONATE (736.6283)
http://www.meirpanim.org/
info@meirpanim.org