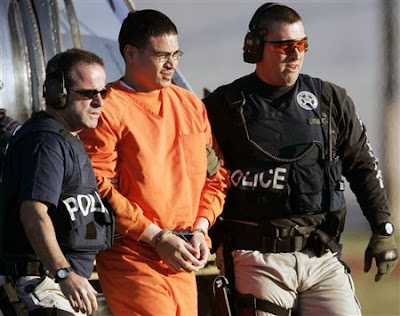 Good riddance to Padilla.
This loser was willing to trade his lack of Saturday night dates for the lives of innocent women and children.

A US federal jury overnight found citizen Jose Padilla guilty of aiding Osama bin Laden's Al-Qaeda terror network and conspiring to commit murder outside the United States.
The jury found Padilla, a 36-year-old former member of a Chicago gang, guilty of supporting Islamic terrorists and of conspiring to kill, kidnap and maim people.
Padilla's two co-conspirators, Adham Amin Hassoun and Kifah Wael Jayyousi, were also found guilty of the three charges they faced.
The seven-man, five woman jury took a day and a half to reach the verdict.
The three month long trial focused largely on wiretaps of telephone conversations between Padilla's co-defendants.

The White House was quick to hail the verdict.
"We commend the jury for its work in this trial and thank it for upholding a core American principle of impartial justice for all. Jose Padilla received a fair trial and a just verdict," said spokesman Gordon Johndroe.
Padilla was born in Brooklyn, New York, and grew up in Chicago. He later moved to South Florida.
A convert to Islam, Padilla was detained in May 2002 at Chicago's O'Hare airport after returning from Egypt and was taken to a US navy prison in South Carolina.
Then-US attorney general John Ashcroft justified placing Padilla in military detention as an "enemy combatant" by saying he was suspected of planning to detonate a radioactive bomb in the United States.
But when Padilla was transferred to the civilian justice system after spending three-and-a-half years in military detention held without charge, the indictment made no mention of the so-called dirty bomb plot.

Instead Padilla and co-defendants were charged with aiding a US-based militant cell of Al-Qaeda that supplied recruits and funding to Islamic extremists abroad.
They were accused of conspiring to murder, kidnap and maim people in Afghanistan, Chechnya, Bosnia and other countries from 1993 to 2001.
The prosecution portrayed Padilla as an Al-Qaeda-trained terrorist who plotted bloody attacks abroad.
"He provided himself to Al-Qaeda for training to learn how to murder, kidnap and maim," government lawyer Brian Frazier told the court during closing arguments on Tuesday.
The main piece of evidence against him was a "mujahedeen data form" found in Afghanistan in 2001 that was filled out under an alias and bore Padilla's fingerprints.
"You are already inside the Al-Qaeda organisation when you get this form to fill out," said Mr Frazier.
Padilla's lawyers said the charges were exaggerated, and insisted he and the other defendants had links with countries such as Afghanistan and Bosnia because they were involved in humanitarian aid for Muslims there.
One of the defence lawyers, Kenneth Swart, told the court that the charges were politically motivated.
Prosecutors claim that Padilla went to Afghanistan from Egypt in 1998, though the defence insisted Padilla travelled to Egypt to study Islam and Arabic.
A key theme during the trial was the government's claim that Jayyousi used his American Worldwide Relief charity as a front to provide funds and equipment to terrorists. The defence team argued the group sent aid to oppressed Muslims in conflict areas.

Padilla's defence team claimed that while held in military detention from 2002 to 2005 their client was subjected to sleep deprivation, threats of execution, exposure to noxious fumes, and extreme heat and cold, and was forced to wear a hood and stand in one position for extended periods of time.

"Jose was not a member of any support cell because there wasn't one. He did not commit violence. There were no victims, real or imaginary," Padilla's lawyer Anthony Natale told the jurors during the defence phase.

US authorities deny Padilla was mistreated.
Jeanne Baker, who represented Hassoun, a Lebanese-born Florida resident alleged to have recruited Padilla, had argued that the US government "is twisting the facts out of all recognition".
The government "really is trying to put Al-Qaeda on trial", Ms Baker said, adding: "It has nothing to do with the facts."
The defence team, which did not call on a single witness to testify, pointed out that Mr Frazier mentioned Al-Qaeda a total of 91 times in his opening statement.