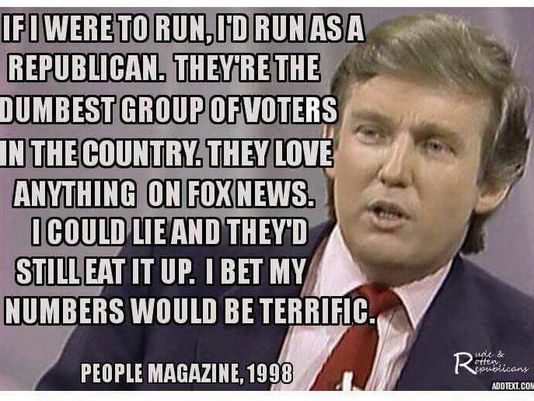 A common explanation for Donald Trump’s supporters is that they are uneducated: in other words, they are stupid. A new GOP poll “proves” Trump supporters are mostly “idiots,” according to something called The Daily Banter.
Someone else wrote about “10 Things Trump Supporters Are Too Stupid To Realize,” including this: “Do you know why he’s appealing to stupid people? Because he speaks their language.” And of course we all know that “Trump’s Candidacy is Finished Without His Stupid Base.”
Time to Defend the Stupid…
I’d like to contribute to the stupid debate. First off, let’s have some compassion for the stupid among us. Half of us are stupider than average, and all of us are stupider than we think. We’d like to live in Lake Wobegon, “where all the children are above average,” but that’s a mathematical fantasy. Stupidity is absolutely rife among the population and always has been.


Some readers may be confused, thinking that stupidity and foolishness are the same. Don’t be stupid: stupidity has to do with intellectual horsepower. Foolishness has to do with life choices. Stupidity can be measured with an I.Q. test. Foolishness shows itself in your character and how you treat others. You would be cruel to blame someone for his stupidity, but you’d be foolish to exonerate the fool. Stupidity is an inheritance; foolishness is a choice.

Stupidity is an inheritance; foolishness is a choice.
History is rife with highly intelligent fools. Bill Clinton and David Petraeus are, by all accounts, brilliant men who made very bad choices about their personal affairs. Every pastor and Christian leader caught in scandal falls in the same category. A darker version of the intelligent fool is the typical tyrant: Vladimir Lenin and Pol Pot used their extraordinary intelligence to murder and enslave millions in the foolish belief that history has sides and anything is justified in service to the right side.

In the Bible, the fool is the opposite of the wise man. According to the Book of Proverbs, the wise man listens to advice, accepts rebuke, hears instruction, lays up knowledge, is cautious, speaks judiciously, and has a quiet spirit. He sounds alarmingly low-energy.

By contrast, the fool slanders others, jokes about wrongdoing, babbles, insists he is right about everything, refuses to listen to advice,is wise in his own eyes, gives full vent to his spirit, is hasty with words, is reckless and careless, despises instruction, and provokes others.

Don’t Suffer Fools for President
It would be foolish to elect Trump president. “Like an archer who wounds everyone is one who hires a passing fool or drunkard” (Proverbs 26:10). Hiring Trump as president would be as devastating to our body politic as walking around stabbing your fellow citizens at random.

It would be foolish to trust Trump with the responsibilities of international diplomacy. “A fool’s lips walk into a fight, and his mouth invites a beating” (18:6). Trump’s bellicose rhetoric is likely to provoke unnecessary fights and trade wars. His open admiration for the dictators of Russia and China is likely to “invite a beating” through appeasement.

If Trump is a fool, so are his supporters and enablers, especially those in the media and the party establishment who abet his success.
It would be foolish to make Trump the symbol of and spokesman for the United States. “Whoever sends a message by the hand of a fool cuts off his own feet and drinks violence” (26:6). The president is the foremost messenger for America to the world. America will not be great again with a fool as her chief spokesman, diplomat, and symbol. Other nations will oscillate between contempt, disgust, and fear—not the good kind of fear, the grudging respect you win through grit and achievement, but the bad kind, the kind of fear you have for a spider that may or may not be poisonous, or the fear you have entering a building that feels like it might collapse.

It would be foolish to reward Trump with the honor of high office. “Like snow in summer or rain in harvest, so honor is not fitting for a fool” (26:1). Politics is not wholly downstream from culture: the stream flows both ways. Our political choices redound upon our culture.

When we elevate people to elective office, we put them on TV for four or eight years; we hear their words day after day; we expose ourselves to their worldview; later, we name streets and schools after them, build statues of them, and put them on our money. They become permanent strands in our national tapestry. Despite the Left’s best efforts, we can never revise history away completely. It took nearly a century to take a genocidal slave owner off the $20. Do you really want to see Trump on the trillion-dollar bill?

If Trump is a fool, so are his supporters and enablers, especially those in the media and the party establishment who abet his success. In the words of a different sacred scripture: “Who’s the more foolish: the fool, or the fool who follows him?”

How to Combat a Fool
That leaves us with a conundrum. What do we do in a world where fools are rich, famous, and powerful and we feel an obligation to say or do something about it? Worse, what do we do when friends, family, and loved ones are making foolish choices? How do you sustain friendships in the age of Trump?

There is a risk in taking on a fool directly, but also a risk in taking the high road and leaving him alone. Proverbs 26:4-5 illustrates the dilemma perfectly. “Answer not a fool according to his folly, lest you be like him yourself. Answer a fool according to his folly, lest he be wise in his own eyes.” If you sink to his level, you get sullied in the mud. If you ignore him, he goes unanswered: Damned if you do, damned if you don’t. Biblical scholars call this the “Rubio paradox.”
You can amass an impressive and irrefutable array of facts and evidence and argument against Trump, like National Review did in January. This is as useful as preaching to the choir. If you’re the sort of person who reads National Review, you probably decided against Trump long ago. Sometimes the choir needs encouragement and admonition, but they won’t fill the pews by themselves.

Perhaps we should fight fire with fire, fight Trumpism with Trump’s own tactics. There is a trend on Twitter of mock-tweeting like Trump—insulting him, calling him a loser, and invariably ending with “Sad!” like Trump does. I dislike this trend. Trump coarsens our discourse. Mimicking his rhetorical style, even in parody, means Trumpism wins, even if Trump loses. This is the quickest way to destroy your relationships with anyone caught up in Trumpism.

Perhaps one of the most effective rebuttals of Trump and Trumpism was John Oliver’s tour de force in February. Oliver crosses the line a few times, dipping his toes into the mud, but he is a professional comedian so he has a little more latitude. He reached tens of millions more people than National Review did. His 20-minute monologue was impressively researched while also being hilarious.

Pity the Fool, and Pray for Us
At the end of the day, we might take counsel from two sages: the Apostle Paul and Mr. T. First, yes, we should pity the fool. What do you imagine lies beneath the bluster, the feigned machismo, the strutting boastfulness? Trump’s success will inspire people to copy him—and that is sad.

Trump’s success will inspire people to copy him—and that is sad.
So: pray. Pray for our country, for our fellow citizens, for Trump’s supporters, and yes, for Trump. Paul reminds us to pray “for all people, for kings and all who are in high positions, that we may lead a peaceful and quiet life” (1 Timothy 2:1-2). Whether or not Trump is elected president, he is certainly in a “high position” by virtue of his fame and wealth and probably will be no matter the outcome of the election. The more our public square deteriorates, the more my ambition has focused on a desire to simply “lead a peaceful and quiet life.” I hope The Donald lets me.

Pray for all the writers and scribblers like me. “A fool takes no pleasure in understanding, but only in expressing his opinion” (Proverbs 18:2). Trump gives us so much material to rail against that it is tempting to indulge every occasion with a snarky Tweet or bilious blog post. Worse, it is easy to give up even trying to understand, to listen to our friends or family caught up in Trumpism. Letting Trump dull our minds and wreck our relationships would be a foolish waste.

Paul D. Miller teaches public policy at The University of Texas at Austin. He is a research fellow at the Ethics and Religious Liberty Commission. He previously served on the National Security Council Staff from 2007 through 2009. Follow him on Twitter.
Photo John Huntington / Shutterstock.com
2016 Donald Trump IQ Proverbs stupidity Trumpism wisdom
Copyright © 2016 The Federalist, a wholly independent division of FDRLST Media, All Rights Reserved.